Cycle London to Paris – Open to All

Update: Unfortunately due to the ongoing health crisis, Cycle London to Paris 2020 has been cancelled. The event will return in 2021.

Support Genesis Research Trust by taking part in this exciting challenge and see the Grand Finale of the Tour de France in Paris! 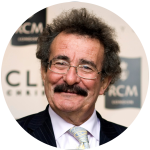 Join this long weekend cycling challenge from London to Paris, covering 300km in 3 days. This wonderful experience will raise funds for our vital research into the causes of miscarriage, stillbirth and premature birth. 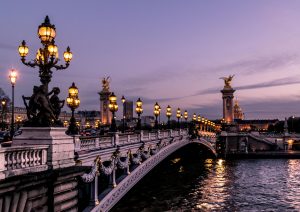 Cycle from Crystal Palace towards Newhaven with sweeping views of the South Downs on our approach. Then set sail to France for two more action-packed days of cycling. Encounter historic towns, sleepy villages and rolling countryside en route. Experience the thrill of riding along wide boulevards and crossing the Seine to finish at the foot of the Eiffel Tower. Join this fantastic London to Paris cycle challenge and raise much needed funds to support our work.

We set off early in the morning through the streets of south-east London, continuing down through Godstone and Outwood. Roads will be busy so we’ll cycle slowly and keep close together. As we head south, our surroundings become less built up and less congested. We enjoy an undulating section of the route including a couple of steep uphill and steep downhill stretches. Long before we reach the M25 and as we continue into the leafy lanes of Surrey, the scenery is very pretty and rural. Some 45km from our starting point we stop for lunch at “The Crown” on Turners Hill, a 16th century farmhouse which has been converted into a public house. We will be ready for a break after the challenging hill-climb it takes to get there!

In the afternoon we pass the South of England show ground, on the approach to Lewes. Watch out for a steep climb here, but you can look forward to the reward of fantastic views of the South Downs once through town. After around 89km we see the “Welcome to Newhaven” sign and we head for the ferry terminal where we have a 4 hour crossing to Dieppe. After wheeling our bikes on board, we have dinner on the ferry and there’s some time to relax. There’s also the opportunity to change clothes and socialise with your fellow cyclists. We disembark with our bikes and cycle the short distance to our hotel for some well-earned rest

After a hearty breakfast, we set off through Dieppe, an old fashioned port town nestled between two limestone cliffs. Within 2½km we are into the pretty Normandy countryside.  We pass through typically French villages, all of which seem to have at least one boulangerie and bar/tabac no matter how small. The route to our first stop in the village of Torcy le Grand is gently undulating.  The terrain is similar for the next stretch to the centre of Saint Saens, with its pretty central square and church. From there we encounter a few uphill sections – some longer and more challenging than others.  From Bosque Eveline (51km into the day) the route becomes undulating once more.

After a long sweeping descent (and a shorter uphill) we reach the quiet village of Argueil and lunch in the square opposite the 16th century church of St.Maurice. The last stretch of cycling is another succession of sleepy villages along quiet roads.  The terrain continues to be undulating with an uphill stretch that affords beautiful views of Saint Aubert-en-Bray and Onse-en-Bray.  We will spend the night in Gournay en Bray, a picturesque town. 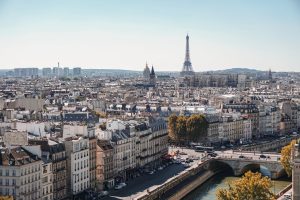 Early start to reach Paris. We anticipate congestion on the Paris approach, so the earlier we start the better! We leave Gournay en Bray in a south-easterly direction bound for Paris and a beautiful days’ cycling. Normandy is known for its bocage, farmland criss-crossed with hedges and trees and we are soon cycling amongst this type of rural landscape. We pass through numerous villages where the terrain is mainly undulating with some short climbs. As we progress through the day, our surroundings start to change as we enter the suburbs of Paris. We stop for lunch after having cycled around 40km. Straight after lunch we enter a forested area known as Le Parc aux Etoiles for about 3km. From there it’s a steep descent towards the River Seine. We cross the river over a bridge close to Poissy. This is a main road and there is likely to be traffic. Once through Poissy we head uphill through more forest on a designated bike lane.  When we come to St Germain-en-Laye we cross the Seine once more, the river having swept round from where we crossed it before. We encounter a succession of traffic lights and roundabouts before crossing the river once again. The route is mainly uphill with one very steep climb followed by a long downhill.

The next bridge we cross takes us into the Bois de Boulogne on the western edge of Paris. The designer of these woods took his inspiration from London’s Hyde Park. Today it is home to the French Open tennis tournament and two horse racing tracks – we pass both of these venues on our route through the park. We re-group inside the park for the final stretch of cycling.  We exit this pretty expanse of green together at Place de la Porte de Passy. From there the excitement starts to mount as we cycle along the wide Parisian boulevards towards our final destination. We cross the Pont d’Iena and finish the challenge.

Today is free for you to explore Paris independently. It is undoubtedly one of the most beautiful cities in the world – Notre Dame, the Champs Elysées, Arc de Triomphe, Montmartre, Sacré Coeur, Musée d’Orsay… there is so much to see and do.

Find out more and register here!

We are always here to help. If you’d like some more information or to talk through the event or fundraising please get in touch with us on 020 7594 5937 or email us at genesisevents@imperial.ac.uk