Thank You Card to our research participants 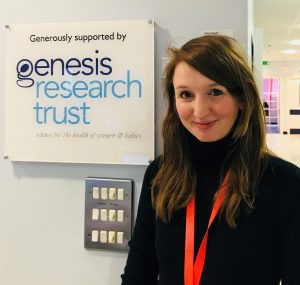 On International Women’s Day, a Thank You Card to our research participants

My name is Hanine and I am a doctor specialising in women’s health. Working alongside other researchers within this field, under the supervision of Professor Tom Bourne at Queen Charlotte’s & Chelsea Hospital, we aim to better understand and care for women with early pregnancy problems.

To celebrate International Women’s Day, I extend thanks to every woman generously participating in our research. Every patient is unique, and has her own story, obviously confidentiality prevents me from describing specific stories, but I’ve merged many cases to create a typical patient, let’s call her Alexandra, because it means “protector of mankind”.

Alexandra was diagnosed with a miscarriage eight months ago, when she expectantly attended her first scan at 12 weeks with her partner. She had no symptoms, and expected to see her baby on the ultrasound machine screen for the first time, but was unfortunately told that there was no heartbeat. She was counselled that the most likely explanation for this terrible outcome was that a ‘spelling mistake’ had occurred in the genetics of her embryo that could not have been predicted, or prevented, and that this was unlikely to be a reflection on her or her partner. She felt crushed, and struggled with worry and replayed the events in her mind for months. Eight months on, she became pregnant again, and attended the early pregnancy unit at 5 weeks of pregnancy for reassurance. The ultrasound scan showed an early pregnancy. She felt exhausted and nauseated, but welcomed these unpleasant symptoms because they gave her some reassurance that her pregnancy was continuing. The non-specific explanation for her previous pregnancy loss, and the lack of any warning signs, motivated her to participate in our study.

We study differences in markers on ultrasound (see picture), and in blood, urine, and the vaginal environment – also called the “microbiome” – to help predict and better understand poor pregnancy outcomes. After having given her consent to participate in the study Alexandra donated a blood and urine sample. She returned 2 days later to donate another blood, urine and vaginal swab sample.  She then had an ultrasound scan, and donated the same samples, every two weeks, until her dating scan. This pregnancy was, thankfully, different.

Alexandra generously donated her time and samples to further our knowledge about early pregnancy. But since 2014, more than 1500 Alexandras have consented to participate in our research study. They are aged between 18 and 46, some have small families, some have large families, some have experienced the turbulent mixture of emotions that may come with loss of a pregnancy through miscarriage or ectopic pregnancies, and many haven’t. They have varied professions: CEOs, full-time mothers, teachers, and cleaners, to name but a few. And we are delighted that almost 100 women are now participating in the same study for the second or third time. All our research participants are united by wanting to help future women and families in their position to be a bit better informed. Their dedication and generosity motivates me. I hope that in 20 years, I will be able to better predict which of my patients may be at higher risk of miscarriage, and so at the very least empower them with this information, but potentially we may in some women begin to be able to prevent this common but so often hidden aspect of pregnancy.

We have already begun to identify molecular patterns that may well help us reach our goal. The research really is a collaboration between the patients and their families, and the research team. For more information see: http://www.imperial.ac.uk/department-surgery-cancer/research/reproductive-developmental-biology/clinical-themes/early-pregnancy/ and https://www.imperial.nhs.uk/our-services/gynaecology/early-pregnancy-and-acute-gynaecology-units. 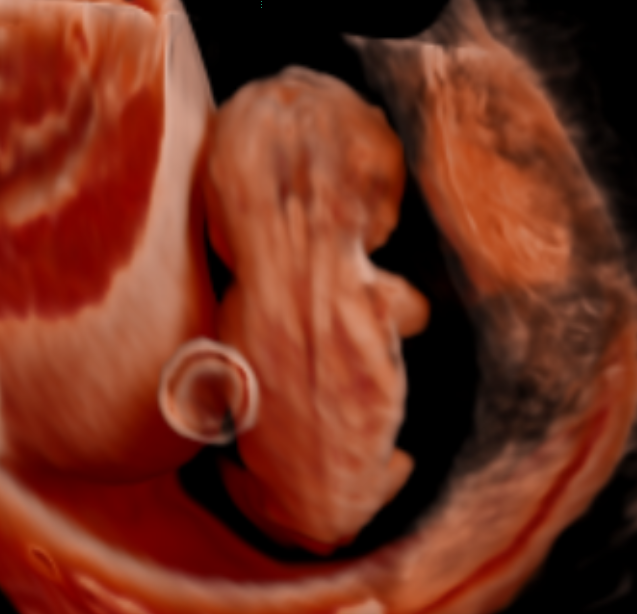 The PRECISE study, led by my colleague Dr Harsha Shah, investigates how advanced 3D scanning techniques may be used to obtain detailed images of the fetus and its organs in early pregnancy. In this image of a fetus at 9 weeks gestation you can clearly see the spine with no significant abnormality such as spina bifida – this is something that parents usually have to wait until 20 weeks to be told. We hope that by determining the feasibility of diagnosing fetal abnormalities in the first trimester of pregnancy using 3D ultrasound, we may be able to obtain more information about the causes of miscarriage and offer earlier interventions and reassurance for parents.