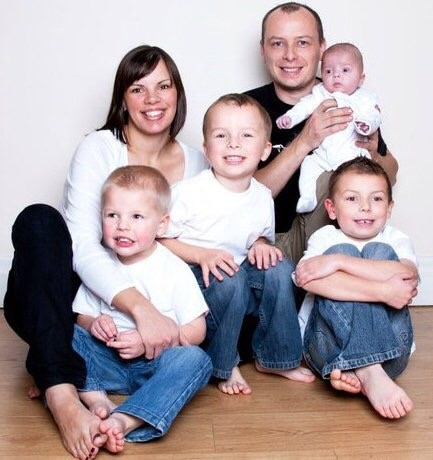 From Meningism to Multiple Miscarriages and HELLP

Helen Jackson lives in Otley, West Yorkshire. She suffered five miscarriages before going to have four boys, now aged 15, 13, 11 and 8.

I’m thankful for my boys but I’m also passionate about raising awareness about baby loss, prematurity and miscarriage. We lost our first five babies. I always say I’ve had nine babies but I have four. Sometimes I can be quite matter of fact about it, it happens to so many people, but I do worry about what it does to your body, and what it does to your mind.

I had early miscarriages – before 12 weeks. They don’t test until you have three in a row. I was young, 24 with my first pregnancy, not a smoker or a big drinker, healthy. No reason was found why my body rejected my babies.

I had really bad days as everyone you see is pushing a pram or pregnant, or you’re not or have just lost one.

I have always suffered from anxiety. When I was 11 I had Meningism. I remember the pain in my head and back like it was yesterday. It’s stuck with me. You question yourself all the time, is there something wrong with me? When I was losing the babies you’re always questioning why your body isn’t doing what it’s supposed to be doing. It’s never dawned on me up until the last three months that I might be suffering from PTSD.

I didn’t get a lot of support. I was scanned and sent on my way. My first miscarriage, my husband was in Canada. I was in so much pain. When they come out you don’t know what to do with them, nobody tells you what to do; you just flush them down the toilet, what else can you do? They don’t tell you.

You don’t really know what to do, when you’ve lost one, you bleed for weeks after. Going around the supermarket, I was losing my baby. Going to buy a pint of milk, I was losing my baby, but nobody knew around me. You want to shout it from the rooftops. It’s a horrible, empty, soul destroying, frightening, lonely experience.

I had the products of conception tested for my last miscarriage as I was in hospital. I remember passing what I thought was two – I thought it was twins. There was no feedback, I just handed it over and that was it.

I don’t think the support is there for mum and dad after. It’s just a piece of paper in a file. You are given leaflets, but they were national miscarriage associations, no small local groups I’d be more inclined to go to.

A doctor said when you get pregnant next time, take a low dose aspirin. So even though your bloods are fine, take a junior dose every day and see if that makes a difference. I did and had a perfectly healthy pregnancy, and my first child, George, was 7 pound 6.

I then had Daniel who was okay at 8 pounds 2 and a quick labour, and Alfie, who was a perfect pregnancy.

When I was pregnant with Daniel, about 22 weeks I bled really heavily. The doctor wondered if it was an old haemorrhage. I had to go to hospital for a blood transfusion. They didn’t know what it was; I had to have a colonoscopy. It was an emergency, through the night, and I couldn’t be sedated, so that was traumatic. I had all sorts going through my head, how will it affect my baby, did I have cancer? I had the transfusion and iron tablets, and I’ve had it three times since but they’ve never found why; although the bleeding and transfusions were not pregnancy related but an on-going bowel problem.

My body then rejected my fourth child, Thomas. I had HELLP syndrome – it’s like pre-eclampsia but more severe. Your organs go into failure.

You look out for dizziness and high blood pressure in any pregnancy, but I had nothing. I just went to bed feeling quite tired, and thought I’ve got three little ones and I’m pregnant so I will be tired. I woke up in the night. I get panic attacks when I’m feeling sick, and thought I was having one of my wobbles. I rang my mum who came round at 4.30am. I was in a complete mess. I called the midwife who advised paracetamol. I was so jittery and on edge, but I didn’t think it was pregnancy related, I thought it was a bug.

The midwife came out and did my blood pressure, called an ambulance, I went straight in. Because I’ve had loads of miscarriages, I knew a lot of terminology, so I knew what they were saying but had never heard of HELLP Syndrome.

When Thomas arrived, and I was still really poorly so couldn’t go and see him. My sister saw him and touched him before I did. At 31 weeks, he was 2 pounds 14, he was in ICU, and in hospital five months. He was oxygen dependant and had lots of surgeries in the end. He’d go blue when he tried to breast feed. I expressed and he was fed through a tube. He was on oxygen till the age of two and a half.

I want to raise awareness to say it’s not easy to have a baby and don’t take it for granted. I have got a good outcome, I have four healthy children. It does impact on you though. If I’m not feeling 100%, I question in my head why, I’m waiting for something bad to happen.

I would like that to inspire someone who is struggling. Please don’t give up hope, be strong. Cry, be patient – patience is massive. I had to be patient to get my babies, and be really patient to bring Thomas home.