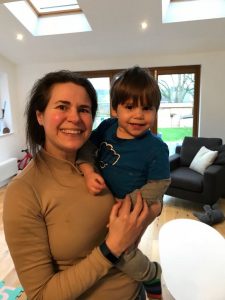 After yet another failed relationship I came to the realisation that the only way I could achieve my dream of becoming a Mum would be to ‘go it alone’.

Whilst this had been my plan since the age of 30, were I to still be single at 40, It was not my ideal.
Initially I tried a round of IUI it’s cheaper and less invasive but with a much lower success rate; it failed but at this point I wasn’t too despondent.

I then moved on to IVF.

After my second round I had what’s known as a chemical pregnancy, that’s to say a very early miscarriage. It was highly stressful because it happened over Christmas but there was nothing I could do. The pregnancy could go either way but on this occasion, sadly it failed.

I then had 2 more rounds of IVF. During the 4th round I felt sure it would work, I was happy, relaxed and eating really healthy food and sure enough, I fell pregnant.

Unfortunately for me the happiness was short lived. I went into my clinic, Create, to check there was a heartbeat, at around 7 weeks, everyone at the clinic was excited for me, by this stage I knew everyone pretty well.
Whilst we did see a heartbeat, they were surprised because I had terrible clotting and again I was told it could go 50/50 either way. I was asked to go home and bed rest. The following week I returned, it was good news, everything was looking better, but again I was asked to rest 1 more week. when I returned a week later no heartbeat was seen, I had what is known as a missed miscarriage. It was devastating and ended up having to have a procedure to remove the foetus.

I then decided I would transfer 2 frozen embryos I had from previous rounds, after all they had developed to blastocyst, day 5 or 6 embryos, so all they had to do was to implant in my endometrium, but even that didn’t work.

I was so sure that I had fallen pregnant from my blastocysts, so took it very badly when I tested negative and realised I needed to think of a new plan.

At 37 I’d frozen my eggs and thawing them seemed the next logical step but when none of these fertilised all these years later I realised that emotionally I couldn’t keep going, I was really shocked that none of my frozen eggs had worked, plus financially it was quite a drain.

When I had initially started my treatment, as far as I was aware I had no known reasons that I couldn’t have a child and the only reason I was doing IVF was purely due to lack of a partner. However, now I fitted into a group named ‘unexplained infertility’.

I made the decision to do double donation because I cared more about having a child than my genes.
My clinic offered a programme in conjunction with a Spanish clinic (IVI) and there was no waiting list for eggs, unlike in the U.K.

Within 2 months and during my first attempt I fell fell pregnant and subsequently gave birth to my gorgeous, funny and happy little boy Joshua.

I feel so blessed to have him, as do my family.

For 2 years IVF was such a big part of my life I literally lived and breathed it. I’ll always keep in touch with my clinic. Joshua makes all the stress of what I’d been through and financial pressures worth while.
I’m not sure that I’ll ever now meet anyone but if I don’t, that’s ok.

"Hope is stronger than fear" - Suzanne and Steven's story