“Hope is stronger than fear”- Suzanne and Steven’s story 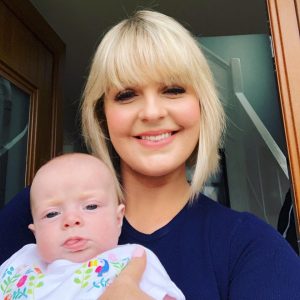 My husband (Steven) and I wanted to share our story to help other people struggling with fertility issues realise they are not alone. We’ve shared the same heartbreak, shed tears for the same reason and if we can open up about our common struggle, we are supporting each other.

The Start Of Our Journey

Our journey started five years ago when we started trying to conceive. Naively I thought it would happen easily for us, as it had for my sister and my Mum, but months went by with tests showing only one pink line and we realised it wasn’t going to be so easy after all. After one year I had some investigations to see if there was a problem. I had blood tests to check normal ovulation, ultrasound scans to check my uterus and ovaries and rule out things like endometriosis and PSOS, a hysteroscopy to check the inside of my uterus and a hysterosalpingogram to ensure my tubes were not blocked. I was shocked and almost disappointed when after all those investigative procedures (some of which were very painful) every Doctor said everything was totally normal with both of us. We had ‘unexplained infertility’ and there was nothing wrong with me that could be fixed. I hated people referring to me as infertile, I felt it stripped me of my feminity and made me feel less of a woman. That word was stating that my body wasn’t capable of doing what it was supposed to be able to do as a woman. I decided that I would always refer to our ‘fertility struggles’ instead.

After that we decided to try IVF. Any couple who have been through it know how much you invest in a cycle. Apart from it being very expensive, it’s physically, mentally and emotionally demanding. The thought of going through it is really scary, but I remember my sister saying to me at that point ‘it’s ok to be scared, being scared means you are about to do something really brave’. I know how true that is now, we were brave and all the women I know who have been through it are among the bravest and strongest I’ve ever met.

We were lucky through our treatment, I responded well to the medication and everything looked to be progressing well. We got sixteen eggs at collection, eight of which fertilised and five of which were graded to be of excellent quality. It then came to embryo transfer which unfortunately didn’t go so well. I woke up from sedation and was told that my transfer had been difficult, and it was meant to be the straightforward part. My consultant couldn’t pass the canula through my cervix easily to pass the embryo through. Unusually my cervix was a very strange angle. I was worried because I knew a smooth transfer was needed to give you a good chance of it working, but I still thought it would work because our embryo was such good quality and everything else had gone well.

I nearly fell part when I got the call two weeks later to say ‘I’m really sorry Suzanne but your blood test was negative, it hasn’t worked. I cried for days, really sobbing and waking in the night crying, it felt like a bereavement. I couldn’t get pregnant naturally and I couldn’t even make IVF work, I just couldn’t understand why. But we picked ourselves up and we decided to try again with a frozen cycle because we had four embryos left. 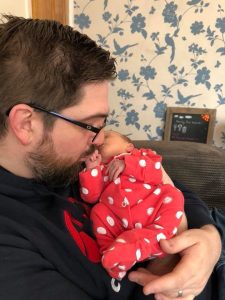 I hoped our frozen embryos would survive being thawed, which they did, and we prepared for embryo transfer yet again. This time for an easier transfer we had our embryos injected into my uterus directly because a normal transfer would be difficult again. We thought we would improve our chances by having two embryos transferred. I felt so sure it would work this time with two embryos transferred and the transmyometrial transfer method.

Again. we found ourselves waiting agonisingly for that phone call with the result. It didn’t work and we were heartbroken again, but we just kept going and went straight for a third try with our last two embryos. Third time lucky for sure!

A third time waiting for the phone to ring, another answer I couldn’t bear to hear, ‘I’m sorry its negative, my prayers weren’t answered today either’ our nurse kindly said trying to offer some comfort, but I felt despair for the first time ever, I really felt it would never ever work.

We had gone through three rounds of IVF, three times of being utterly devastated and each time becoming more afraid that I would never be a Mum. But hope is so much stronger than fear and it lingers in your soul and sometimes it won’t let you give up. We would keep going but we needed a break.

We went on holiday to a beautiful town in Greece and it was just what we needed. While relaxing and enjoying our time together I didn’t really notice that my period was very late. When I got home I did a test to check and I could not believe that it was positive. I was pregnant! After everything we had been through we had conceived naturally. Steven and I were elated but at seven weeks I started to bleed and a week later it was confirmed that we had lost our baby. I didn’t think I would get over it and you never really do, but I did keep going with the support and love from Steven and our amazing family and friends. Steven always said to me ‘if its just me and you, that’s ok’ and I knew we would always have a wonderful life together but also that I would feel completely unfulfilled in my life if I wasn’t able to have a child. Our situation just felt so unfair, why us?!

As the months went by I tried to relax and enjoy life, I went out a bit more, relaxed my obsession with eating healthy organic food and not drinking alcohol. I was hopeful that I would get pregnant like so many other people do after a fun night out and a few drinks. But it didn’t happen, and I didn’t have much fun, because all I wanted was to have a baby and be a mum. I was past going out every weekend I had spent my twenties going out and having fun.

After then months on the waiting list, our NHS funded cycle had come around (our first three had been at a private clinic). I felt positive about this one despite our devastation with our previous cycles. We also had the most lovely, caring and dedicated Doctor that took a particular interest in our case and he had a plan of how we would have the best chance of this cycle working. His dedication and capability made it possible for us to have a smooth and easy embryo transfer, the normal way. for the first time ever. However out of sixteen eggs collected, we only had two that we could use, but they were both good quality. It all depended on these two embryos. We had one chance and no embryos to freeze and after a very painful egg collection we both agreed IVF would never be an option for us again. I couldn’t go through anymore painful procedures and Steven couldn’t watch me suffer. We had both our precious embryos transferred and felt very hopeful that this was our time. We watched on the monitor via ultrasound a little white dot pass into my uterus, our embryos in fluid.

A few days later I started to feel really unwell, so I went to hospital to get checked out. It was confirmed later that morning that I had ovarian hyperstimulation syndrome (OHSS), a side effect of the egg stimulating medication that around 1% of women get. I had to be admitted to hospital straight away and my Consultant explained that even though I felt awful, having this condition can sometimes mean that the IVF has worked and that I was possibly pregnant. He did a blood test to check.

I was admitted to hospital that afternoon and felt really grim, my tummy and legs had filled with a stone and a half of fluid, the pressure was very painful, my blood was very concentrated putting me at risk of a blood clot, my liver and kidneys weren’t functioning properly, and my veins had collapsed so things like blood tests were very difficult and sore. Steven got me settled on the ward and went home to get my things from home. A Dr came and told me that my Consultant had called and wanted me to know that my test was positive. I was pregnant. The tears rolled down my cheeks and I felt so lucky that we had overcome the first hurdle. None of our family, nor Steven or I got too excited because of what we had been through before. We took it one day at a time.

I spent weeks recovering at home from the OHSS and eventually the day came of our eight week pregnancy scan, and we were nervous to say the least. The nurse doing the scan showed us our baby straight away, it was moving and was perfect for an eight week old baby. We were amazed and when we say the heartbeat we couldn’t hold back the tears any longer. We were pregnant with one of our two embryos transferred. We felt so grateful, but anxiety was a constant in my mind eased only by seeing our baby doing well at a ten week scan and then again at a twelve week scan. Reaching twelve weeks was another hurdle overcome.

At seventeen weeks we got a terrible scare when I had some painless light bleeding. I clung onto Steven in the bathroom after my legs fell beneath me and cried ‘please not again, please not my baby’. I thought the worst, but Steven reassured me everything would be ok. At hospital we had to wait six hours to see a Doctor and it was the worst wait of my life. When we got a scan, we could clearly see our baby moving around with a strong heartbeat, she even gave us a wave. She was a little survivor. I had bled because of a low-lying placenta. I stayed in hospital for a couple of days and everything settled down. 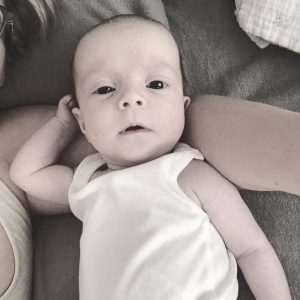 The rest of my pregnancy was an anxious time, I was in and out of hospital with several episodes of bleeding due to placenta previa and on the 8th of March 2018 after a massive haemorrhage at 37 weeks and an emergency c section, our beautiful baby girl arrived safely. She was healthy and just perfect. She was a fighter, and aptly arrived on International Women’s Day, our one perfect embryo out of sixteen eggs. The love we felt for our baby the moment we heard her cry and saw her perfect little face was overwhelming.

There is not a day that goes by were we don’t feel unbelievably grateful for our daughter, we are so so lucky to be parents. I hope everyone struggling with fertility problems finds their happy ending. Remember that hope is so much stronger than fear and even in the most desperate situations, miracles can happen.

#IVF40 - "moment for most serious reflection