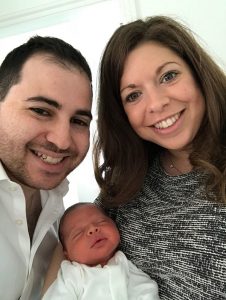 In early 2015, my wife Emma and I decided that the time was right to start trying for a baby. My name is Edward Bergen, married to the most wonderful ‘mum’ I’ve ever known, Emma Bergen. This is our fertility story.

Let’s be clear, when we began trying for a baby we thought that, given that we were in our mid-20s, we would be successful in a short amount of time. Oh, how wrong we were. It got to early 2016, and we were now ‘well-read’ or should I say, ‘well googled’ regarding how cycles work, which ovulation test to buy, which ‘fertility’ vitamins we should be taking, and the best technique for taking a pregnancy test at the end of each month. Unfortunately, it seemed all our research was futile. We decided to get some help.

Now, we are in a minority. We have wonderful families who were able to help pay towards the treatment that we needed. We visited a fertility doctor on Harley Street in London, one of the most wonderful people we have every come across. Emma spent the next 8-12 months being poked a prodded. She ingested pill after pill, and took pessary after pessary. She went through various tests and each one came back as ‘negative’, meaning her infertility was ‘unexplained’. I had my very exciting, or should I say, awkward test, as well and it turned out I have very strong swimmers.

After a series of months of testing, being advised on when best to ‘try’ in each month, we were suggested by our doctor to look to the NHS for the next stage of treatment, IVF.

The process of applying for IVF through the NHS is complex, emotional, time consuming and frustrating. To start with you need to visit a GP to get a referral, 3 weeks to get an appointment. Next, you visit another doctor at your local hospital to review your application and see if you can be referred to have IVF; another month gone. After this, you must fill in another set of forms, almost identical to the original referral for an IVF coordinator to review and have signed off by a consultant. This IVF coordinator confirmed that Emma and I met the national guidelines (NICE) for us to be given treatment. Six weeks past and the coordinator explained to us that our application was now with Guys and St Thomas hospital who would be in touch to collect more information and do some blood tests, for their records. Another identical application later and Emma and I now had to wait for a further eight weeks to hear when our first IVF appointment was. Of course, in all this time, Emma and I were unfortunately still seeing negative pregnancy tests each month; we were ready for the next stage.

However, the administrator at Guys and St Thomas had other ideas. We received a phone call in early 2017. Our application had gone to our local CCG in Hertsmere. Apparently, Hertsmere do not follow the national guidelines for IVF treatment. They follow their own set of guidelines. We were told that we had been rejected for IVF. The reason; because we had been trying for two years, rather than three. NICE claims two years is acceptable, Hertsmere CCG does not. This was information that our GP, the hospital doctor, the hospital consultant (the application signee), the IVF coordinator, all could have known and told us, but ‘had a lack of knowledge’. We wasted six months due to a technicality. What made matters worse was that the administrator at Guys and St Thomas thought it was appropriate to say to my distraught wife, ‘It is unfortunate that you haven’t become pregnant naturally’.

So six months wasted but we didn’t give up. We were referred by our private fertility doctor to see an IVF doctor, the guy that gave us our wonderful son. The ‘private’ process of IVF, was in contrast to our previous experiences, smooth. It is not surprising; we paid, with our families’ help, nearly £10,000 for it. After two weeks of injecting Emma, egg  collection, successful embryo creation and not one, not two, but three rounds of IVF, we received the remarkable news that Emma was finally pregnant. Truly the greatest feeling in the world.

Now we are very lucky. We didn’t have the same financial stresses as many, many other people out there have. We also had a doctor that was straightforward, calming and focused. We got our baby Theodore.

Since our IVF experience, it seems that NHS treatment has near but gone. One can only hope that in the future the process will become more affordable, simpler, and more streamline. Until then, there will be many people out there who have a gap in their lives waiting for a child to fill.

"Hope is stronger than fear"
Suzanne and Steven's Story